We’ve been following the news of the coronavirus outbreak for months. Now, gradually, some patterns are emerging. Our analysis of World Health Organization data provides important clues both in terms of the impact of measures and the course of the coronavirus pandemic. Stricter measures have been quickly spreading across the globe. As of Tuesday, Britain also followed the path and introduced an unprecedented lockdown. However, when these restrictions and measures of social distancing, in general, are implemented, and the importance of the covid-19 test density has now become more visible. 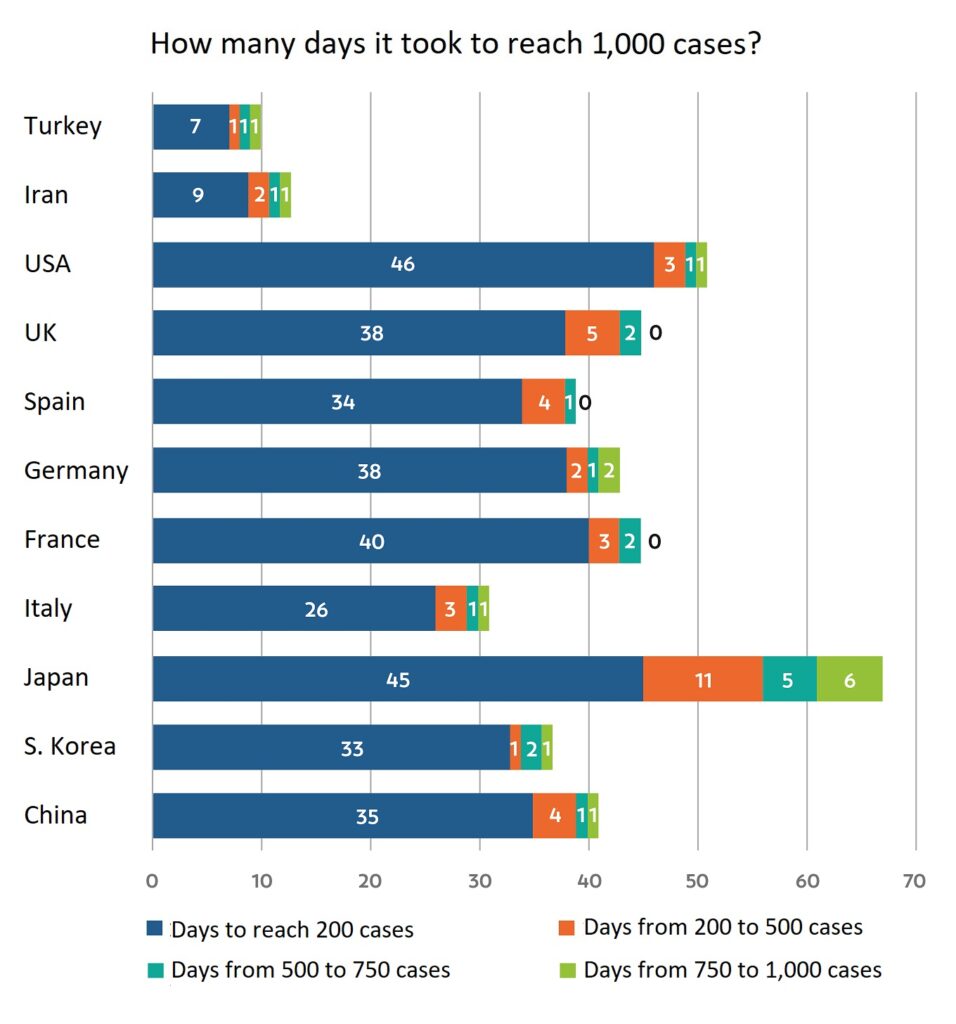 As Director-General of the World Health Organization noted in its latest statement, it took 72 days for the number of cases to reach 100,000 worldwide, and for the 200,000 it took only 11 days and only 4 days was enough to reach 300,000! Therefore, we have analysed this speed of spread rate by comparing the number of days passed to reach certain levels in a selected number of countries. We have used the data from the World Health Organization situation reports, particularly in countries where the virus has been spreading at an advanced level and the restrictive measures have been implemented for various periods to show the contrasts.

The data shows that some countries are more resistant to the spread of the virus. The number of 1,000 cases is reached much later in relatively better prepared and early reacting industrialized countries. We see in most countries, it has reached the 1,000 threshold in 40 days or less whereas, in countries such as Japan and South Korea, which have begun to take very early strict measures along with mass testing, it takes much longer. In Italy, which began social distance measures in Europe at the earliest, it was reached in 31 days. In countries behind in introducing social distancing measures and tests, we see the numbers were rising much faster. In Turkey and Iran, 10-13 days were enough to exceed 1,000 cases of infection.

In countries such as China, Italy, Iran, the United States and Spain, the countries where the most cases have been identified and the earliest to face a large number of covid-19 cases, 15,000 threshold was reached in roughly 10-12 days.

Italy and China have reached from 15,000 cases to 50,000 in 9-10 days. This is in line with the WHO statement that in later stages numbers are progressing much faster. The number of cases seen in these five countries as shown in below figure is, in a sense, promising. Since there seems to be a parallel pattern between countries and more importantly any similarity to Chinese pattern is worth noticing. 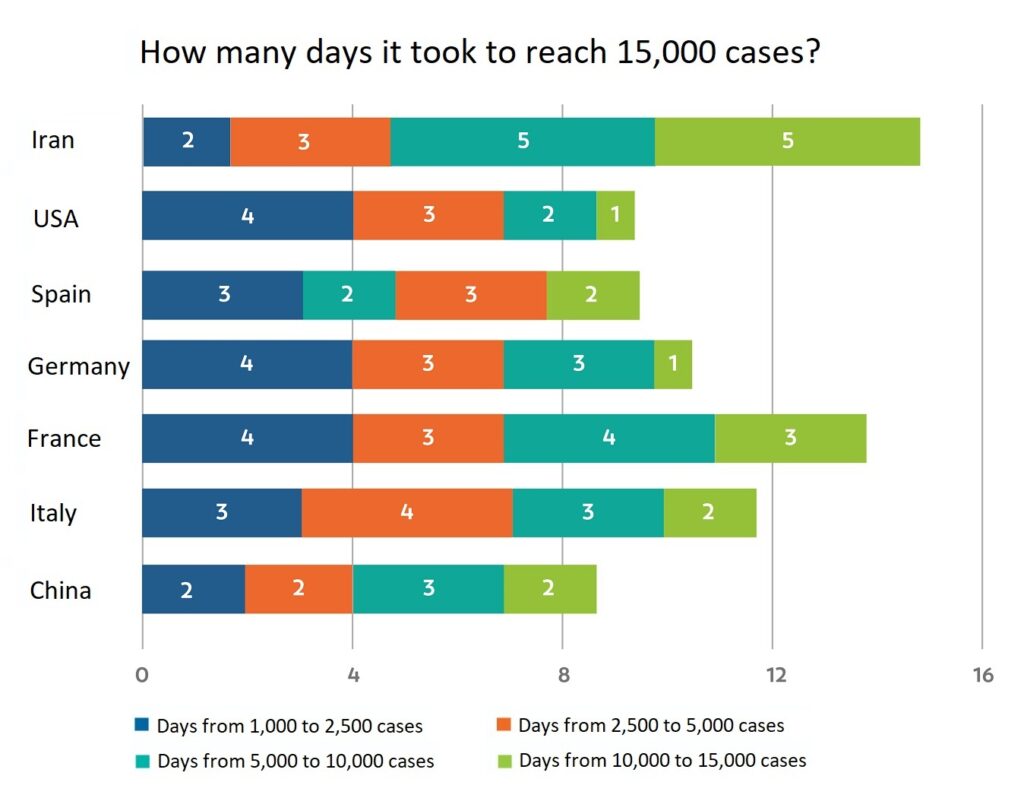 It’s also bad news because it shows that this pandemic is likely to continue to spread at the same speed for a while. Nevertheless, we anticipate that these periods, i.e. the number of days to reach higher thresholds, will be shorter in countries that were late in responding and imposing social distancing measures.

There may be many reasons for the differences in the time it reaches the number of cases we observe disparaged between countries. We may think there are cultural and geographical reasons, but there is no doubt that more concrete lycee tests and measures to prevent spread are important.

How can pandemic develop from now on?

The course we’ve seen so far shows that there have been a few different models. The first is the high test numbers seen in Japan and Korea and very low case counts, co-ordinated with tight control. The second is that despite the various social distance measures we observed in Italy, both the number of cases and deaths is high. The third model is countries where both the number of tests and cases are low, but uncontrolled spread can be high. 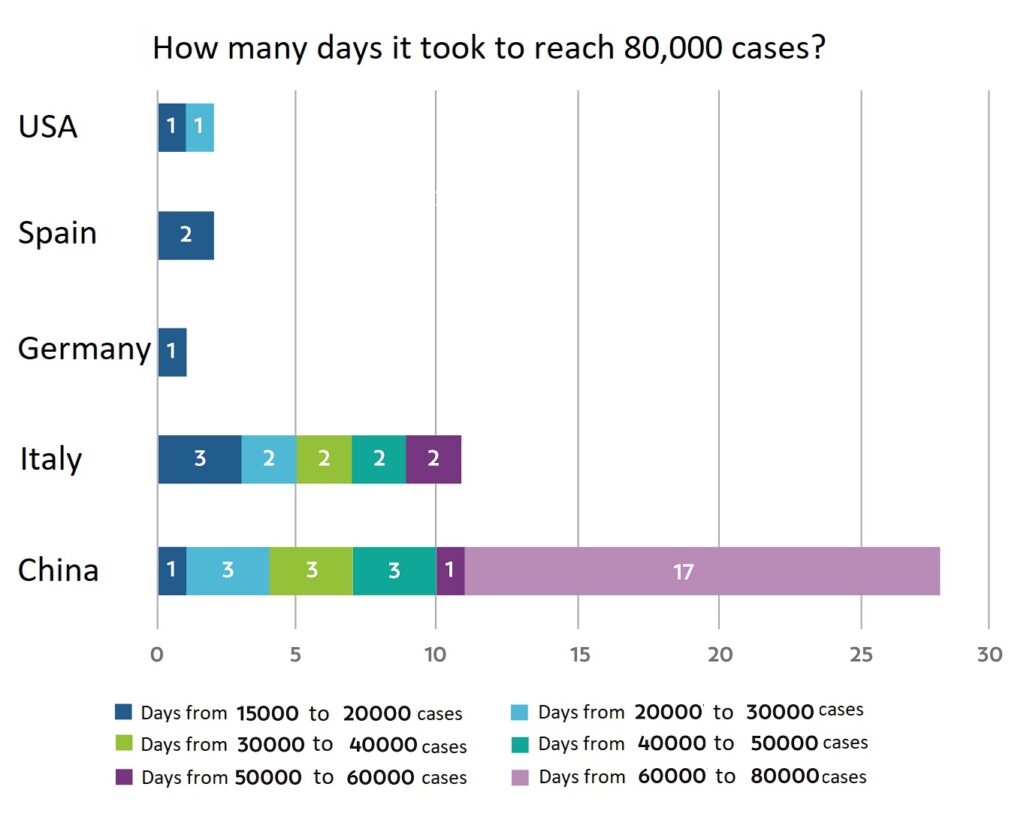 In European countries, we see that the course of the virus’s spread is similar to the example of Italy.

For example, one of the latecomer countries in countering the coronavirus pandemic, Turkey also seemingly follow the patterns seen in Italy, with approximately 20-22 days lag. Turkey saw, on the 11th day, number of cases and deaths very similar to what Italy witnessed on their 32nd day. As the number of covid-19 cases in Turkey progress, following the same pattern, we can expect it to rise to 20,000 levels in the next 10 days or so. Unfortunately, the death toll is likely to approach the 1,200-1,400 band too.

There have also been analyses and reports in the UK that the Conservative Party government will follow the Italian model, which has led to the initial herd immunity strategy abandoning its strategy very quickly. As we have shown in the charts, we see that the United Kingdom is coming from about two weeks behind Italy, and the latest measures show that such expectation has been dominating the government’s planning too. This means in two weeks time, health service is likely to be overwhelmed as infected cases as well as the number of people with more severe symptoms will sharply increase as it has happened in Italy.

Similar scenarios are likely for many other countries including the USA. Although Germany seemingly does better now, the projected numbers there are also indicate a sharp upward move. Figures below illustrate the Italian pattern, British, Turkish and US patterns so far.

Finally, it is worth highlighting a point about China. China has probably done the hardest work on Covid-19, coronavirus which, we now know, is dating back to mid-November 2019. Chinese case has plateaued for about a week and numbers are going down significantly while also sizeable numbers are reported to be recovering. This should be giving hope. However, since it is a country that is not exemplary regarding democratic conventions, the information coming from Chinese officials are treated with a pinch of salt. This makes the news about the declining number of cases a little suspicious. Nevertheless, we will closely watch the developments in China for a while. The country is now considering lifting the lockdown. If what we’re hearing is true, we might think that this crisis could be overcome sooner than initially feared. In general, however, it is still early to celebrate as we are almost certain that the number of cases will increase in other countries that started tests and implementing measures relatively late.

Many scientific analysts show that the rate of spread has decreased by about 90 per cent when social distancing measures including lockdown are applied. The whole point is to take these measures early and implement them strictly.

We know that it is possible to take early action against covid-19 and similar pandemic crises, and we will soon share our ongoing efforts in this direction. What’s certain is that neither the virus nor the consequences are inevitable. At this point, the application of social distance is the most important step that can be taken outside of vaccine development efforts.